We may have known that Excel spreadsheet is a grid of cells with position name formed by column and row label. Column label is in alphabet combination: A, B, .. Z, AA, AB,..AZ, BA… And row label are number: 1, 2, 3… Cell position name is also called cell reference.

Cell reference is used in calculating formulas, for example: in cell C1 we have =A1+B1, this mean value of C1 is calculated by value of A1 added to value of B1.

However, there’re a few types of cell reference, let’s go through them.

Relative cell reference is the the “distance” of a cell to the standpoint cell: how many cell to the left (right, top, bottom), like above sample. And by default, Excel considers every cell reference used in a formula as a relative reference. That is, it takes no heed of actual column row coordinates. 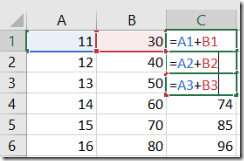 What if you don’t want the cell reference to be auto totally adjusted in C2, let’s say you want it to be =A1+B2. This is where you need absolute reference. Then, in C1, the formula should be =A$1+B2, whereby $1 in A$1 means you tell Excel not to auto adjust the row coordinate when the formula is copied to another cell.

Excel make you flexible to tell it whether to make the column unchanged, or row unchanged, or both unchanged when copied by adding $ sign before the wanted column or row coordinate. We have below types of absolute references:

What if you have 2 spreadsheets on 1 workbook, then in one sheet you want to refer to a cell in another sheet. This is called cross-sheet reference, and Excel does support it. The reference is formed by: Sheet-Name!Cell.

For example I have 2 sheet: Sheet1 & Sheet2, Sheet1 has some cells with value. In Sheet2, at cell A1, I can refer to cell A1 of Sheet1 by the reference: Sheet1!A1. Let’s see the screenshots:

Looking at the reference, you can notice that it similar to Cross-sheet reference with the workbook file path added at the beginning. There’re 4 parts totally in this reference. Let’s break them down:

So, that’s all about Excel cell reference. Hope that it help you have a clear picture of how it works.

YOU MAY ALSO INTEREST